Psalms Of The Dead Choir 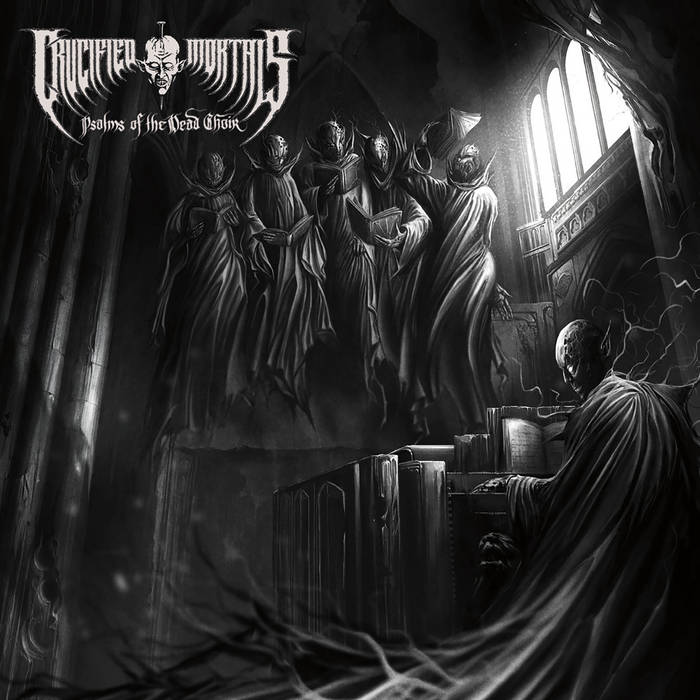 CRUCIFIED MORTALS' highly anticipated second album, Psalms of the Dead Choir. One of the best-kept secrets of the long-fertile Cleveland metal scene, CRUCIFIED MORTALS have been quiet-yet-prolifically perfecting their craft since 2001. Under the steely resolve of founder/mastermind Reaper, a handful of demos and splits culminated in CRUCIFIED MORTALS' critically acclaimed debut album. Released in 2011 and simply self-titled, this debut album largely introduced the band to the wider, international metal scene, proving that they're one of the hungriest and charismatic deathrashing metal bands around. But as much as Crucified Mortals was a highlight for the band, a decade after its formation, it will now be eclipsed by Psalms of the Dead Choir.

In many ways, Psalms of the Dead Choir is both a consolidation of CRUCIFIED MORTALS' considerable strengths and a fresh new start for the band. Whereas Crucified Mortals featured a then-full lineup, here on Psalms of the Dead Choir, Reaper handles all vocals, guitars, and bass and is once again joined by Ash Thomas (SHED THE SKIN, VLADIMIRS, Faithxtractor) on drums, who's manned the CRUCIFIED MORTALS skins for the last five years. Together, they explode forth with the trademark deathrash for which the band's built a steady name in the metal underground. Immediately memorable but never relying on rote verse/chorus formula, there's a narrative flow to CRUCIFIED MORTALS that's heightened by Reaper's fierce and clearly enunciated vocals, telling twisted tales of macabre horror and fiendish deeds - and compelling instant headbanging. And yet, for however feverish the attack may be across these Psalms, there's a newfound sense of nuance and dynamics, largely spurred on by the dramatically twisted guest guitar solos of Sauron's Lore Lord. As a whole unit, CRUCIFIED MORTALS breathe new life into thrash-intensive death metal (or death-intensive thrash?) that hasn't sounded this vital since classic Deceased or even the early days of Carnivore, Rigor Mortis, and Hobbs' Angel of Death. Read these Psalms of the Dead Choir and weep!

A statement from Reaper reads: "Starting with darker imagery - for this genre - we put a lot of focus on doing unique and/or fresh ideas with Psalms of the Dead Choir, from different guitar amps on virtually every song, numerous vocal effects to establish a different surrounding, to deeper meanings behind otherwise straightforward lyrics. There's a lot to analyze for the in-depth listener, but it is straightforward and ripping for those looking to jam out."

Damned upon decaying crosses for 19 years Crucified Mortals transcribe horror stories into metallic hymns in the band's own haunting style. Satisfying the ear's craving for speed, heavy and memorable riffing complimented with harsh angry vocals and pounding drums. Crucified Mortals are a unique style of Thrash and Death metal. ... more

Track Name: Traitor
It is you who calls to us disturbing our exploration
Come with us we will show you bliss within your suffering

An innocent youth condemned to eternal life of anguish
Through a pact, she will divulge the soul of a traitor
Her stubborn assent spared her life, can she abide
Guiding way to the forsaker he she has defied

Caught inside a realm of life and refuge for the dead
Shattered in his liberation fleeing a flock of dread
Rebuilt, embodied, bloodletting through his feat
Sought beyond his travels, redeemed to be destroyed

In between these forces, too obscure to discern
She's frantic for redemption, of the faction affirming her
She cannot hide a face of guilt, but expose treachery
Relinquishing her fate, in vindictive penalty

Caught inside a realm of life and refuge for the dead
Shattered in his liberation fleeing a flock of dread
Rebuilt, embodied, bloodletting through his feat
Venged for his betrayal, he will remain in hell
Track Name: Behind The Lurid Mask
Secured within their refuge in fear of autumns past
when death itself roamed this night behind a lurid mask
manifesting superstitions, forging gruesome scenes
it was veiled once more by darkness as the peace was broke by pleads

confined are only believers, the others stand their fright
disguised with crafted costumes, the traditions revive tonight

Chorus
the moon lights the horizon, as the day has come to past
death's angel may awake this night, with no warning of its lash
dressed in squalid clothing, blinding with deceit
it will strike again in vengeance for the nature of this beast
no showing of its facets, ambiguous to the eye
its form as a frame of man, pacing to his mark
amidst daunting settings, its essence embraced
deceived are only those mirroring this sacred rite

Echoed shrieks of joyous fear, resonate through the air
obscuring the sound of caution, without menace to it's plight

the observance mauled by zealots, no heeding of their call
unmasked in their fury, sanctioning bigotry

Chorus
the moon lights the horizon, as the day has come to past
death's angel may awake this night, with no warning of its lash
dressed in modern clothing, blinding with routine
it will strike again in vengeance for the nature of this beast
showing all its facets, regular to the eye
it's form as a frame of man, pacing to his mark
amidst daunting settings, its essence embraced
victim are only those mirroring this sacred rite

there they stood divided, subdued by fallacy
in an omniscient shadow, where death prevailed once more
behind a lurid mask
Track Name: Dusk Of The Advent
Ascent from hell, back to earth, reborn by evil seed
to serve the great deceiver in mankind's calamity
declaring himself lord, redeemer of sin
in the grace of believers, seated at the throne of god

from his post exploiting, turning man against his kin
condemning to fire in the dusk of the Advent
when he will embody, then reveal himself to them
I am the one true god, my name -antichrist

to walk among mortals his soul embodied man,
like Christ to god: begotten, sacrificed to bring the end

from his post exploiting, turning man against his kin
condemning to fire in the dusk of the Advent
when he will embody, then reveal himself to them
I am the one true god, my name -antichrist-
Track Name: Ominous Creatures
On a distant barren deformed humans struggle for their lives
Starved and sick concocting the method for their ploy
They are ominous creatures with no passion determined by their greed
Impatient as they wait to start the next pursuit

Every kill they gather together engorging on the meat
Cluttered and hastily picking bodies like starving vultures they eat
With no resent for this heinous act they fight ravenously
Gluttonous barbaric tribe longing to gnaw at this foul feast
Track Name: Into Eternity
I never thought that it would be
Something like this, something I can't believe
Life slips away, I'm begging for it to stay
Desperate to stay alive
Not ready for death, not ready for afterlife
My struggle for life devours my everything
Towards the light I strive
Towards my death I fly

A light in front of me appears
I'm at the end yet here it begins
Slowly I crawl away from the shining light
But something seems to hold me back
Halfway to death, into eternity
The light feels so warm, embraces my dying soul

My dying soul will enter the unknown
Harmony, this fear will disappear
The longing in my eyes for peace eternally
Tearing my soul in two, tears me apart

Eternity in front of me the light is all I see
Eternity devours me, will I be free

A doubt inside of me arise
Return to life, or facing my destiny
I feel myself drawn to the other side
Entering a world of light
Relief in my mind, relieves my entire soul
At last I let go, I flow into emptiness

The passage to eternity

So here I stand
In this rain of falling tears
Time stands still
Everything around is dead
I cannot see
I'm embraced by nothingness
But do I want
To find the passage back to life
Track Name: Kill Upon Command
I am ordained by god, last prophet of the advent
I will discern his signs and fulfill his holy deeds
bestow your faith in me, I will guide you to his kingdom
question not my lead and vow allegiance to his word

I have seen the symbol, proclaiming his return
for his grace we cleanse the shrine, abolish all its sin
we sacrifice to him, deceitful ones shall perish
in life I abhorred their evil, in death lament their souls

I believe
prophecy
chiastic in its reading
ascertained
and portrayed
by a man of god's selection
To vilify him and deny him
expels divine plan
I will obey
his vengeful call
and kill upon command
Track Name: Hideous
Like a sleep beyond its thresh
I woke fully alert
To the world a place unknown
like an infant fresh at birth
my brain ached from convulsion
sound I couldn't discern
no inner voice to conceive
a rabid beast instinctively

Lacerations joined by threads
on my limbs pulsating pain
in my mind I think and feel
no memory I retain
My body a pieced up puzzle
matched by anatomy
I exist a miscreation
by no one I am reclaimed
Track Name: Bringer Of Death
A history of murder composes my life
began with my father proceeds with my knife
in league with an army I kill with those kin
our hearts drained of holy so we create sin

my mind's filled with hate
destruction is my fate

Dozens of victims reside with me
they're locked up, bound, screaming, trying to brake free
they have fear on their face and plead in their eyes
but they'll have no escape all of them must die
I'm all that is evil, a devil in flesh
the one who unnerves and fills with detest
a merciless murderer plaguing with fear
there's no bliss with living only death I hold dear

Murder, the devil tempts my will, overbearing my yearn to
Kill; when I die I'll be shunned and burn in the fire of hell's
Domain; in my home your flesh will creep as you gaze at the
Deceased; you better hope god takes your soul here I own your corpse

The hunter is hunted they've discovered my name
they don't know my face, only death is my fame
when it's time they find me and ambush my home
I am ready standing land I rome
and so it has begun, towards my doom I shall be done
cleaving the wind steel targets my heart
it rips through the flesh and tears bones apart
it pierces the organ driving my life
and lays me dying suffering with strife

Murder, the devil induced my will overbearing my yearn to
Kill; I am dead yet still they fear as I burn in hell's
Domain in my home the stench now reeks of remains from those
Deceased; I plead the devil take my soul, on earth I am a corpse

Bandcamp Daily  your guide to the world of Bandcamp